Cow Chop was a channel created by James (UberHaxorNova) and Aleks (ImmortalHD) on the 29th of February, 2016. Their first upload, "FIRST VIDEO", was uploaded on the 1st of April. The channel's main content is couch gaming co-op; though, they also produce sketches, vlogs, and various non-gaming series. 🐮🔪

The name Cow Chop is said to come from Couch Co-Op, Couch Op, Cou Op, Cow Chop. When asked "Why cows?" James responded with "Why not? It goes with the name." [1]

Cow Chop was originally thought to have been part of The Creatures [2], however, on April 28, 2016, James and Aleks announced on a Twitch live stream that they were leaving The Creatures along with Aron, Joe, and Trevor [3]. They still remain a part of the Rooster Teeth Let's Play Family. [4]

The initial idea for Cow Chop was made back in 2014 according to James. While he was still with the Creatures, James hinted towards the creation of Cow Chop during James Hub 3.0 [5] without Aleks' consent.

After leaving the Creatures and the office building sometime in the second half of April 2016, James' rented a small house in Colorado as a filming location as well as headquarters for the newly founded group. From there on out the poor house would endure the most inhumane treatment imaginable, with food being thrown around on a regular basis. Along with which a wall would be hammered a hole into, fireworks among other things would threaten to nearly burning down the house on several occasions and the cellar would be covered in actual human feces. Plastic and smartphones would be burned in the kitchen and furniture thrown in the garden. But it was but a mere door and a military grade stink bomb prank that caused the Cunt to finally snap. Upon seeing this torture, the Cunt, an anonymous watcher, would send the videos in question to the superiors of the landlord of the Cow Chop-house, who was not amused at all at the nearly total destruction the house almost came in touch with on multiple occasions. But in their eyes, the destruction of that particular door was the breaking point. The company who owned the property forced the landlord to evict the Cow Chop crew from the house, even though they replaced the door with a better one and fixed all the damages they had done to the house almost immediately after them happening. Arguing this to no avail the Cow Chop crew had to leave but left the door behind as a sign of good faith.

Following the eviction, the crew had to make do with what they had: Their personal property. To be more precise, James' personal property. In the transitional period between the two eras videos were shot in James' house (much to his dismay), with Trevor literally living on the streets (not really, though). During this period they did what they do best and caused carnage, almost losing their eyesight when playing around with bleach.

Somehow the Cow Chop crew got the wonderful idea to rent a barn as a makeshift place to continue to make videos while now planning to move to Los Angeles, where the rest of the Rooster Teeth Family was. What they had not calculated in was, however, that the barn was barely heated. They were also not able to properly set up any equipment, resulting in mainly Nintendo Switch based content. It was also revealed that the barn used to be a meth lab. Stan the fish and Jorel the intern were introduced during this period. Eventually Cow Chop moved to LA, leaving the barn behind and Jorel to take care of Stan.

Cow Chop moved to a warehouse in Los Angeles where they produced their content until the end. The warehouse allowed for more large scale content to be made, which also meant more destruction. As well as a bigger space for the employees to work at. During the move to LA Aron left the channel, as he did not want to move. Jakob and Lindsey were added to the team in 2017 as editors and cameramen, with Lindsey having known Brett for a long time and Jakob having been a friend of Trevor’s. Jacob, a new intern also joined for a brief time, mainly as a cameraman and occasional brief on screen personality. Matt also joined as an editor and cameraman, as he and Brett had been friends since college and was offered a job there. Near the end of 2017 Joe left the channel as he wanted to pursue different things and also was becoming a father, though Joe said there was a chance he would come back in the future. In early 2018 Anna left as she wanted to move closer to her twin sister to help her and Trevor took an indefinite vacation, later leaving all together. His last hurrah was the show Woah, That’s a Let’s Play!. Later on Alec and Abby joined as interns, with Abby leaving in September of 2018 as her internship ended, Alec decided to join Cow Chop, making the video thumbnails and later being promoted to a main cast member. Asher was also let go in September by Cow Chop.

In early 2019 while making a video, James broke his leg during a part where he had to use a skateboard. He took a break from the channel and later had to get surgery for the injury. It was announced in James’ video, "I'm Leaving CowChop", that he was departing from the crew. In response, Aleks had posted another video titled "James Is Leaving Cow Chop" on the Cow Chop channel. He mentions how it is not a surprise that the decision was finally made, and outlines how the remaining group plans to finish out the 2019 year because of contractual obligations.

On March 17, 2019 (the day before James announced his departure from Cow Chop) the channel reached its highest subscriber count of 938,060. As of August 2019 the channel has just under 890,000 subscribers, with an average loss of 272 subscribers per day. While there is no official statement in regards to the future of Cow Chop after the 2019 year, it is inferred that the channel will disband. On April 4th, 2019, through Patreon, an announcement of a "GOING OUT OF BUSINESS" sale was happening soon, making it obvious that Cow Chop will be ending this year. During the Cow Chop panel during RTX 2019 Aleks introduced and ended the pannel by saying "Welcome to the final Cow Chop panel ever." and "Thank you for coming to the final Cow Chop panel ever."

During the year, Garrett and Adri joined as interns and later were hired as main cast members. John and Tony also made their presence known and Matt started appearing more on camera. Brett and Aleks also bought cockroaches which are currently residing as pets in the Warehouse. Jakob and Alec made their own channel, OFFCANNY, which they planned to pursue once Cow Chop has ended. Through September to November Alec, Lindsey and Matt left the group. On December 20, 2019, John tweeted a picture of the warehouse, simply saying "That's a wrap", concluding and announcing that Cow Chop had officially ended.

On December 31st, 2019, after ending all of their other shows and doing their Christmas special, Cow Chop uploaded its last video titled “THE FINAL INTERVIEW.” A sequel to their first ever video after the channel trailer, ”THE SUCCESS STORY”. 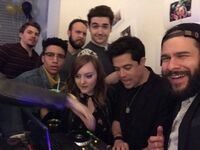 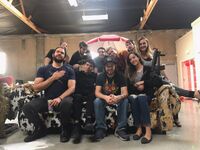 The Crew all together on Jacob's last day 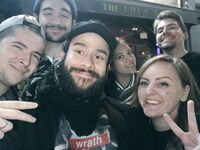 The Crew at a Funhaus Show Premiere 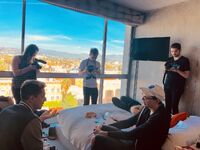 The Crew filming a CCTV with Steven Suptic 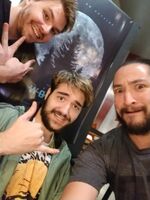 Retrieved from "https://cow-chop.fandom.com/wiki/Cow_Chop?oldid=9163"
Community content is available under CC-BY-SA unless otherwise noted.